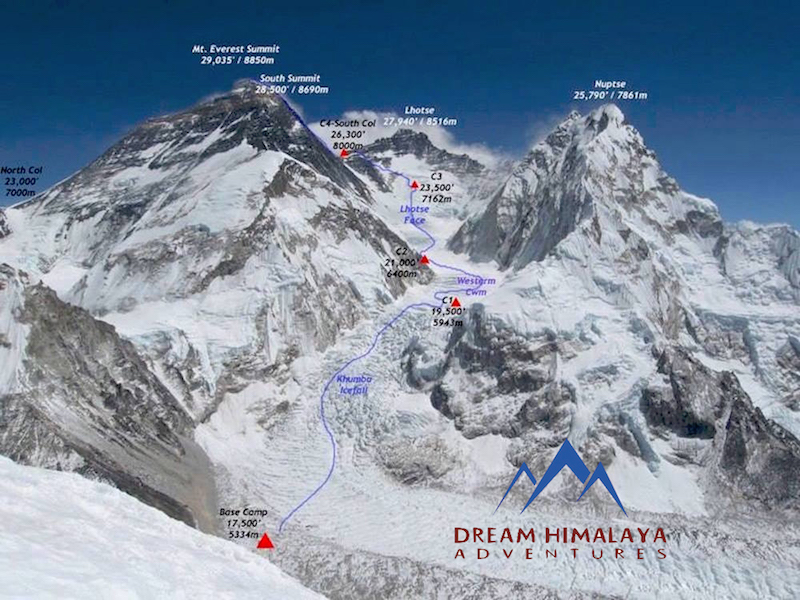 Mt. Everest, rising 8,848m (29,028ft) above sea level is the highest mountain on Earth. For decades summiting Everest has been considered one of the greatest mountaineering achievements. In the spring of each year, we embrace this intense challenge by taking a group of qualified climbers to Nepal and Tibet to climb Mt. Everest via the South Col and North Col route respectively. The South Col was the first successfully climbed route on Mt. Everest by Sir Edmund Hillary and Tenzing Norgay Sherpa, accomplished this feat in May 29th, 1953. Since then, thousand of climbers stand on the summit of Mt. Everest. It’s the most climbed and the high possibility of success route on the mountain. Dream Himalaya Adventures has been running successful Himalayan mountaineering expeditions since more than decades now. We support full board expedition services up to the summit of the peak and as well as base camp and advance base camp logistic services. We are committed to providing you with the best quality service and experience to help you reach your goal. However, all climbing members are required to have considerable climbing experience at higher altitudes, preferably in the Himalaya.

Our Sherpa are highly qualified, experienced and multi summiteers of Mt. Everest and other 8000m peaks. All of our Sherpa are proficient mountaineers with excellent success rates, and are always focussed on the safety of clients as their number one priority. All Climbers will be assisted by our well experienced Sherpas at the ratio of 1:1 and there will be a manager at base camp to assist the team members and the Sherpas. Climbing Routes & High Camps

After final preparations in Kathmandu, we'll fly to Lukla and begins our 9 days teahouse trek in the Khumbu Valley to Everest base camp. We will ascent the peak via normal route (South East route), establish our base camp at ~5364m at the foot of the notorious Khumbu Icefall before making our way to Camp-1 at 5,945m.
We'll climb to Camp-2 at 6,402m smack in the middle of the Western Cwm, up the Lhotse face to Camp-3 at 7164m. Finally, we'll head up the South Col to Camp-4 at ~8000m before making our summit push.

After the Icefall, the climbers arrive at Camp I, which is located at 19,500 feet.  Depending on the type of expedition, Camp I will either be stocked by the climbers as they ascend and descend the Icefall or by Sherpas in advance.
The area between Camp I and Camp II is known as the Western Cwm.  As the climbers reach Camp II at 21,000ft, they may be temporarily out of sight of their support at Base camp.  Nonetheless, modern communication devices permit the parties to stay in contact.

As the climbers leave Camp II, they travel towards the Lhotse face (Lhotse is a 27,920ft mountain bordering Everest).  The Lhotse face is a steep, shiny icy wall.  Though not technically extremely difficult, one miss-step or slip could mean a climber's life.  Indeed, many climbers have lost their lives through such mishaps.

To reach Camp III, climbers must negotiate the Lhotse Face. Climbing a sheer wall of ice demands skill, strength and stamina. It is so steep and treacherous that many sherpas move directly from Camp II to Camp IV on the South Col, refusing to stay on the Lhotse Face.

As you’re leaving C4, it’s a little bit of a down slope with the uphill side to the left. There are typically snow on the ledges to walk down on, interspersed with rock, along with some fixed rope. The problem with the rope is that the anchors are bad, and there’s not much holding the rope and a fall could be serious. Fortunately it’s not too steep, but there is a ton of exposure and people are usually tired when walking down from camp. The rock is a little down sloping to the right as well, and with crampons on, it can be bit tricky with any kind of wind. There’s a little short slope on reliable snow which leads to the top of the Geneva Spur, and the wind pressure gradient across the spur can increase there as you’re getting set up for the rappel. Wearing an oxygen mask here can create some footing issues during the rappel, because it’s impossible to see over the mask and down to the feet. For that reason, some people choose to leave Camp 4 without gas, as it’s easier to keep moving down the Spur when it’s important to see all the small rock steps and where the old feet are going. Navigating down through all of the spaghetti of fixed ropes is a bit of a challenge, especially with mush for brains at that point. One lands on some lower ledges, which aren’t so steep, where fixed ropes through here are solid. At this point, it’s just a matter of staying upright, and usually, the wind has died significantly after dropping off the Spur. The route turns hard to the left onto the snowfield that leads to the top of the Yellow Bands.

Camp IV, which is at 26,300ft on the South Col, is typically the climbers' first overnight stay in the Death Zone.  The Death Zone is above 26,000 feet.  Though there is nothing magical about that altitude, it is at this altitude that most human bodies lose all ability to acclimate. Accordingly, the body slowly begins to deteriorate and die - thus, the name "Death Zone."  The longer a climber stays at this altitude, the more likely illness (HACE - high altitude cerebral edema - or HAPE - high altitude pulmonary edema) or death will occur.  Most climbers will use oxygen to climb and sleep at this altitude and above.  Generally, Sherpas refuse to sleep on the Lhotse face and will travel to either Camp II or Camp IV.

Camp IV is located at 26,300 feet. This is the final major camp for the summit push.  It is at this point that the climbers make their final preparations.  It is also a haven for worn-out climbers on their exhausting descent from summit attempts (both successful and not).  Sherpas or other climbers will often wait here with supplies and hot tea for returning climbers. From Camp IV, climbers will push through the Balcony, at 27,500 feet, to the Hillary Step at 28,800 feet.  The Hillary Step, an over 70 feet rock step is named after Sir. Edmond Hillary, who in 1953 along with Tenzing Norgay Sherpa, became the first people to summit Everest.  The Hillary Step, which is climbed with fixed ropes often, becomes a bottleneck as only one climber can climb at a time. Though, the Hillary Step would not be difficult at sea level for experienced climbers.

High Lights of the Expedition

Climb Lobuche East Peak (6119m) for acclimatization purpose
Climb the world’s highest peak, Mt. Everest with already summitted Sherpa Guides
World’s best Climbing Sherpa guide to each climber
Excellent logistic set up at base camp with carpeted along with heated dining tent.
Personal 10x7 feet Box Tent to each climber at base camp
Enough Oxygen system will be stocked for any emergency purpose
Fully medical back up and smooth communication system on the mountain
WIFI at base camp
Regular weather forecast information
Most experienced Chef at base camp and his crew