Peak climbing in the Nepal Himalaya is a dream for many climbers, with most of the world's highest mountains and more than 1300 snow capped peaks to view and choose from. Nepal is justifiably the most popular destination for mountaineering expeditions. Most climbing trips take you through wild and virgin alpine regions, places out of reach for regular trekkers. Our service covers all trekking peaks in Nepal that are open for mountaineering expeditions. Most of the trekking peak trips are combined with visiting popular trekking destinations. There are 33 trekking peaks listed under Nepal Mountaineering Association (NMA), and this is the best way to experience mountaineering in Nepal before attempting a bigger mountain. 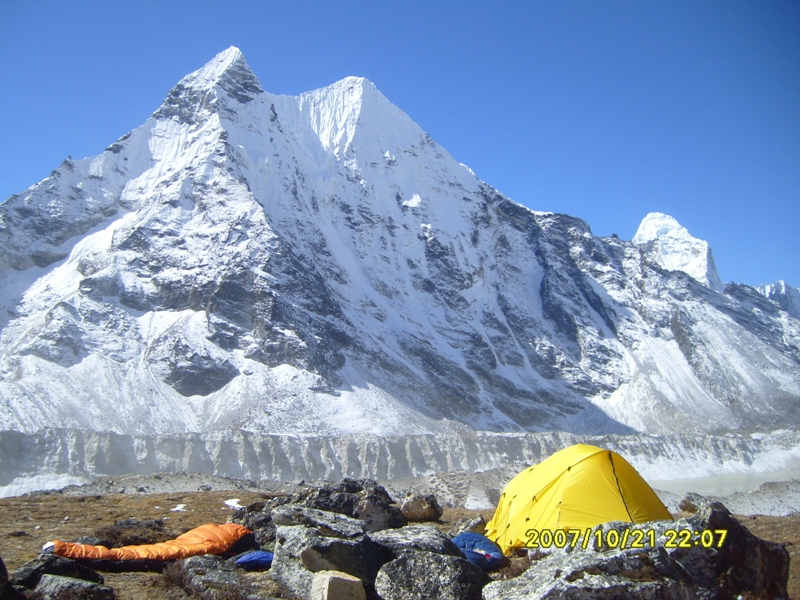 The Everest area, known locally as Sagarmatha National Park, is home to some of the world's highest peaks as well as the famous Sherpas, migrants from eastern Tibet who crossed over the Himalaya and settled here sometime in the late 1400s or early 1500s. This trek is one that goes deep into the heart of the Himalaya. 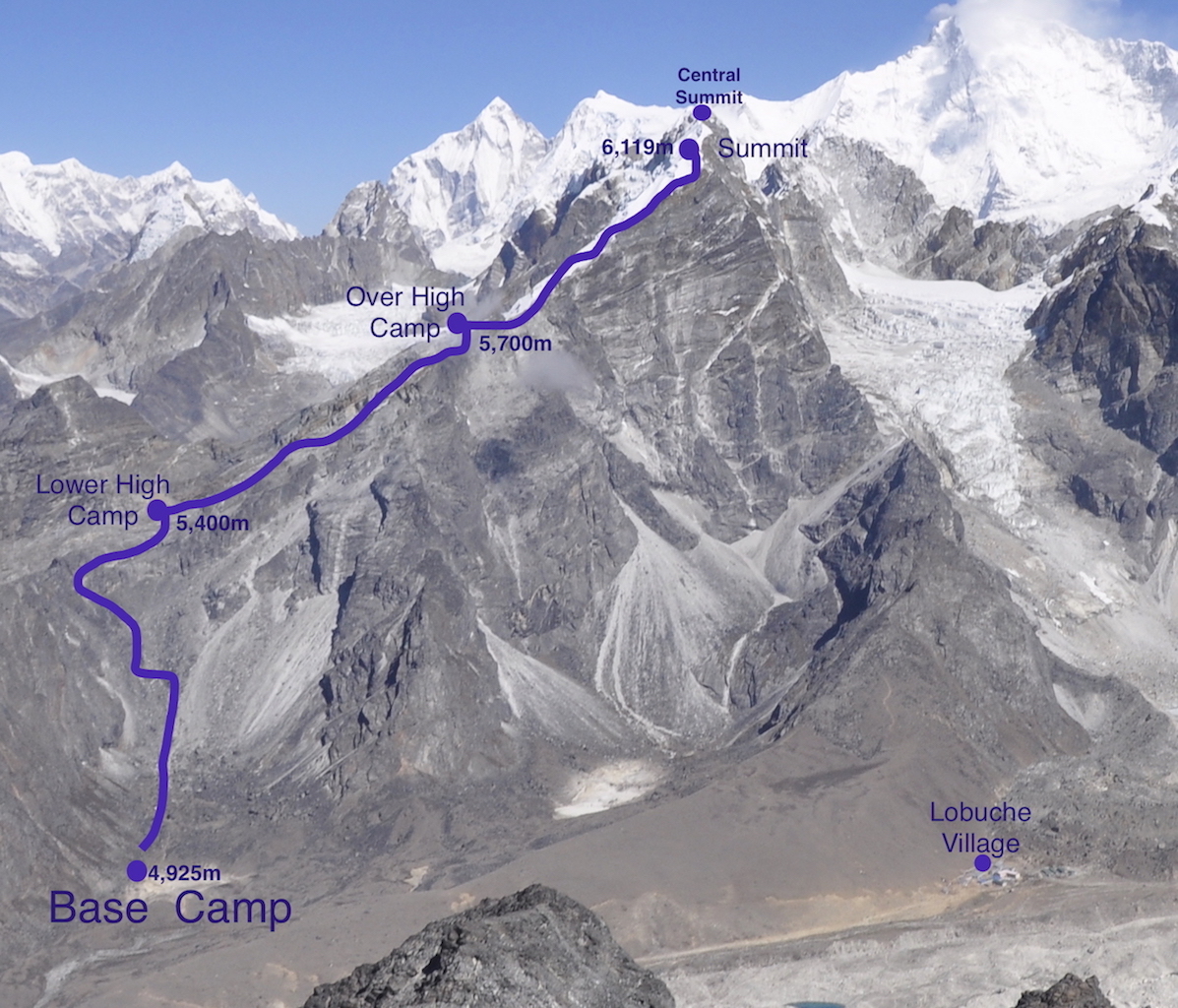 Lobuje Peak is officially classified as a group “B” trekking peak by Nepal Mountaineering Association and this peak offers a challenging climb but attainable climbing objective and is an ideal mission for trainee mountaineers. The climber must be proficient in using climbing gears like ice axe and crampons etc. 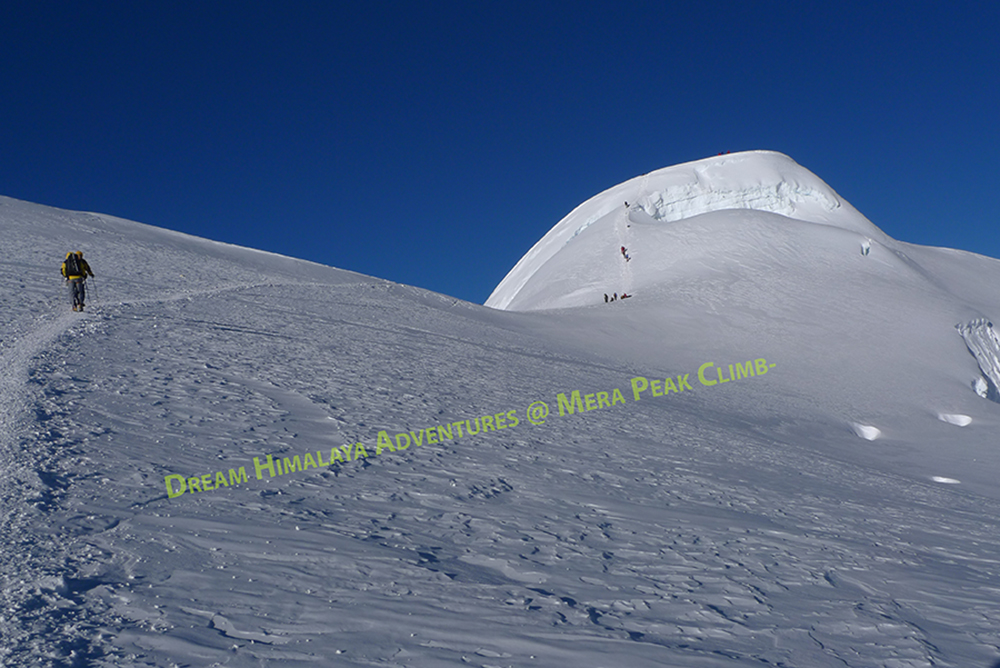 Mera Peak (6,476m) is the highest trekking peak listed under the Nepal Mountaineering Association. It is one of the most popular trekking peaks and is a peak to learn basic mountaineering skills before attempting big mountains. The ascent of the Mera peak does not require as much technical expertise in comparison to peaks such as Lobuje Peak, Chulu West, Chulu East, and Mt. Amadablam, etc. [...] 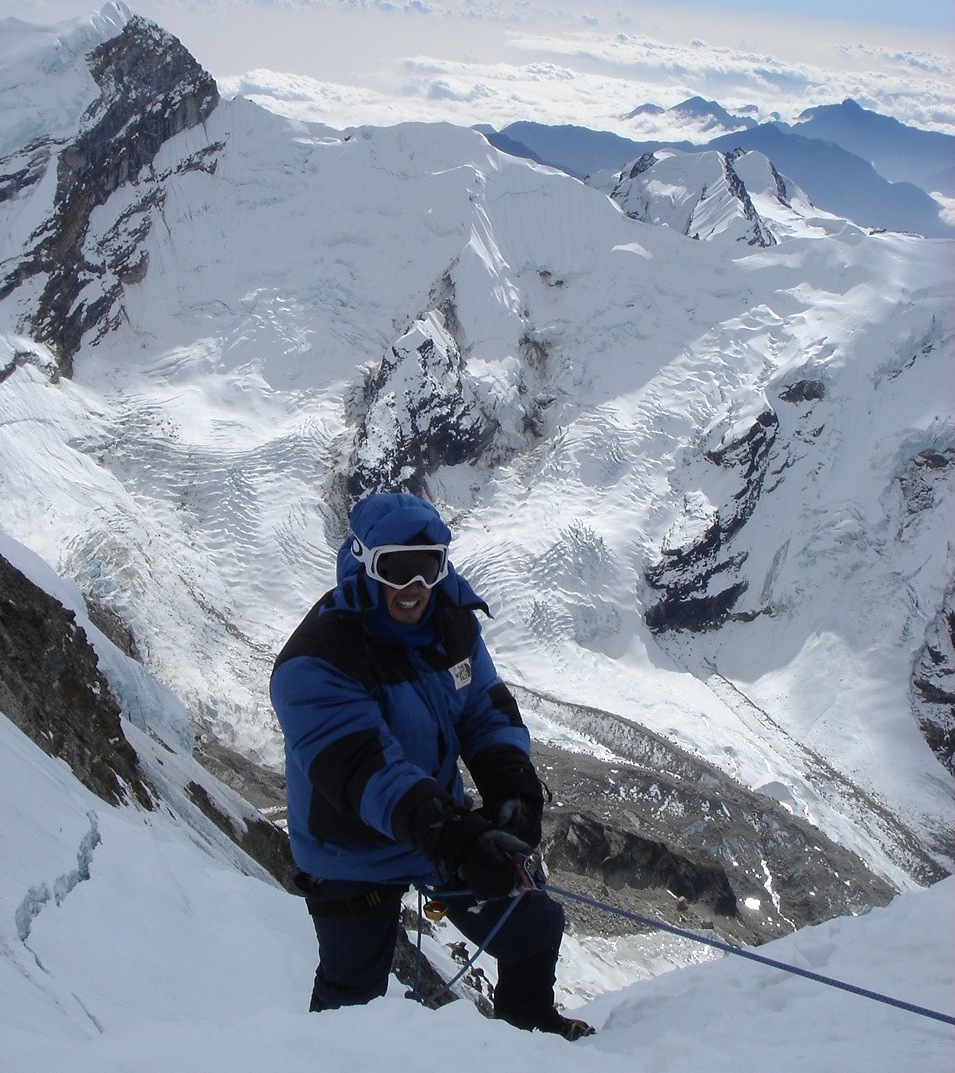 Mera Peak (6,476m) was first climbed in May, 1953 by J.O.M. Roberts and SenTenzing.  Our ascent will follow the glacier that leads to Mera La (17,767') and on to high camp where we will prepare for our early morning summit.  From high camp, we can take in a sweeping view of Kanchenjunga, Chamlang, Makalu to the east, Everest and Lhotse to the north and Ama-dablam, Cho-Oyu and [...]

Mount Everest, 8,848m (29,028ft) above sea level reign as the highest mountain on Earth. For decades summiting Everest has been considered as one of the greatest mountaineering achievements. In the spring of each year, we embrace this intense challenge by taking a group of qualified climbers to climb Mt. Everest via the South East Ridge of Nepal. The first successfully climbed on Mt. Everest [...] 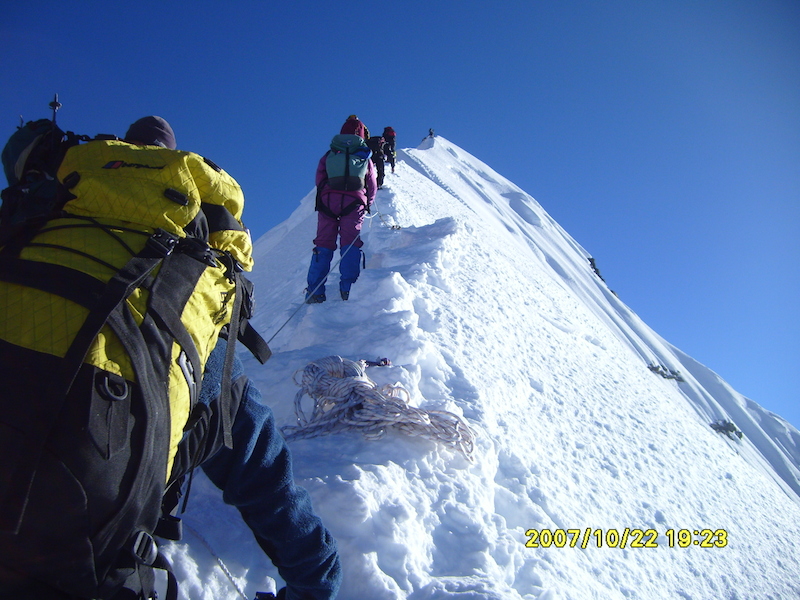 Gokyo Ri/Gokyo Peak (5,360m) is a peak in the Khumbu region of Nepal’s Himalaya. It is located on the west side of the Ngozumpa glacier, which is the largest glacier of Nepal and known to be the largest in the whole Himalaya. Generally, it takes about 3 to 4 hours to climb and to descend down to Gokyo Ri. If we climb early in the morning, we can able to return Gokyo to have breakfast. [...]

The Kyajo Ri (6,186m) peak was officially opened for climbing by the Nepalese Ministry of Tourism in 2002 and listed on group climbing peak by Nepal Mountaineering Association. The peak is part of the Khumuche Himal, and located in the Gokyo Valley, Mount Everest Region of Nepal. Kyajo Ri is a spectacular, and very beautiful mountain. The first ascent was made the same year by a British [...] 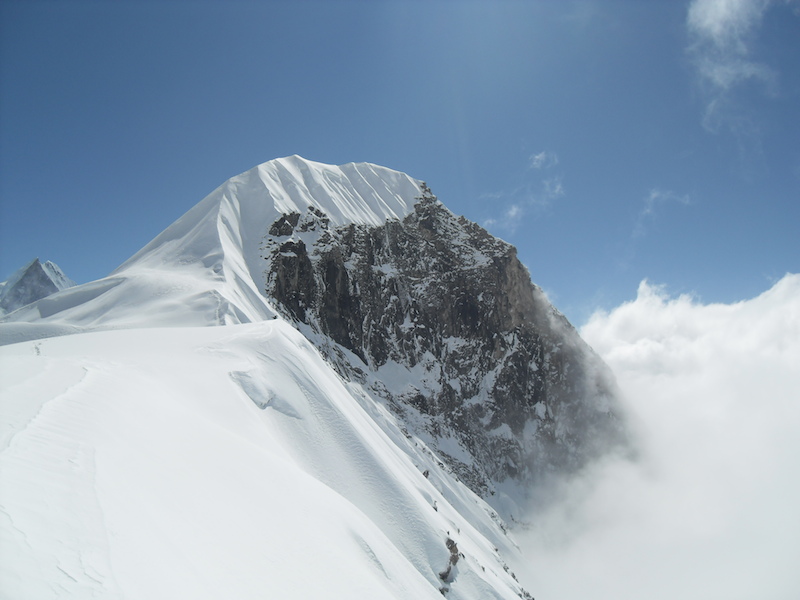 Tharpu-Chuli/Tent Peak (5,663m) is one of the most climbed Nepal Mountaineering Association group ‘ B’ trekking peak in Nepal. Other major highlight of the trip is exclusive exploration of Annapurna sanctuary. The summit of Tent peak offers a stunning 360 degrees panoramic view of the surrounding Annapurna massif. 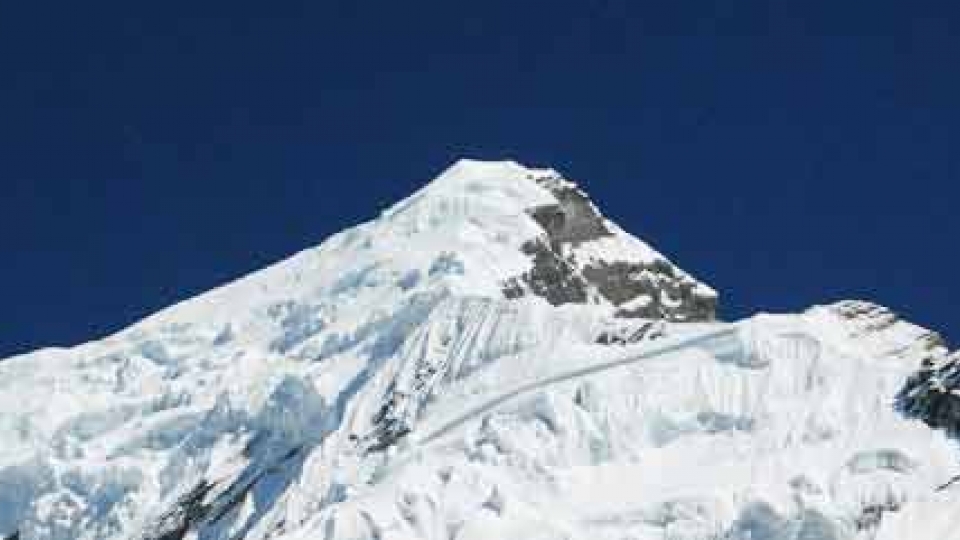 Chulu Far EastPeak (6,059m) is 45 degree climbing and not technically difficult peak and we will settle a high camp near col at about the altitude 5,350m. From the col we follow the long South – West ride on snow and ice to the summit. The German expedition team 1st climbed the peak in 1955 via the North –East Ridge. The Peak has been compared in character to Island Peak in the [...] 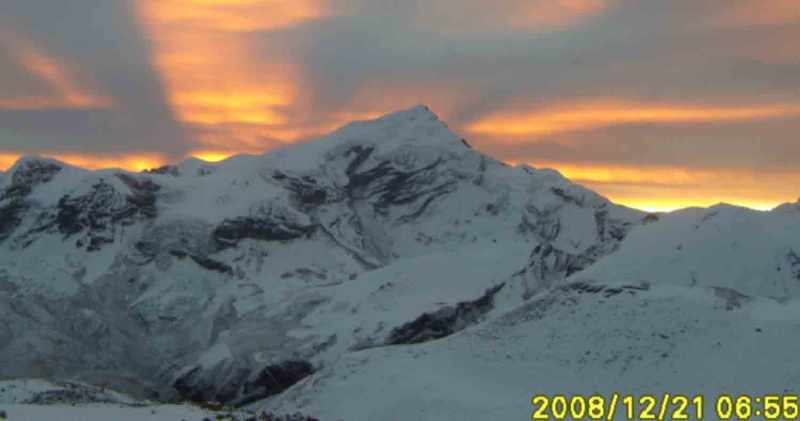 Chulu West is part of the Manang Himal, which are quite rightly included in the larger Damodar Himal, the eastern limit of which runs south from Chako and Peak 6,687 in a north-to-south direction along the Hunlung Khola, Nar Khola and Phu Khola. To the south it is bounded by the Marsyangdi Khola and the Mesokhando La. To the west its limit is the Kali Gandaki and to the north the [...]