Tibet, the roof of the world located in western China with a border of Burma, India, Bhutan, and Nepal to the south. It covers 1.2 million sq km of land with approximate 3 million populations. Dalai Lama left Lhasa in 1959. There are several airports, such as Lhasa Gonngar International Airport, Shigatse Peace Airport, Ngari Gunsa Airport, Nyingchi Mainling Airport, and Qamdo Bangda Airport.

Tibet is filled with deep gorges, high Himalaya, hill, plain land, Iceland, volcanic land, wind-sanded, lakes, and rivers. There are at least 800 settlements. There is a cold climate with an average height of 4500 m above sea level. There are at least 120 rivers, such as the Ganges, Indus, Mekong, Yilowade, Brahmaputra, and the Salween. The four mountains of Nepal, including Mt. Everest, Mt. Cho Oyu, Mt. Shishapangma and Mt. Makalu are bordered it. King Songtsen Gampo (640-650) married a girl Bhrikuti as a first wife from Nepal. It believed Bhrikuti's manifestation is Green Tara later. Tibet's GDP reached 131.06 billion yuan ($20.5 billion) in 2017.

Tibet is an interesting place for tourists. Lhasa (3656 m) the capital of Tibet Autonomous Region is a focal point for travelers. Potala Palace (7th century) and Jokhang Monastery are enlisted a heritage site in 1994 by the UNESCO. The Plateau has at least 1500 lakes, including the 47 lakes with 100 Sq Km big. Manasarovar Lake (4510 m) and Mt Kailash (6714 m) is the most popular pilgrimage site in the world. Guru Padmasambhava had lived in the 8th century for a meditation. He denied the Bon religion and established Nyingmapa Sect Buddhism. Tibetans liked Guru Rinpoche as a Guru. The lifestyle of Tibetan, food habits, Buddhism traditions, culture, and landscapes motivate travelers around the world. Tourism and agriculture are the main occupations there. Contact in Yeti Trail Adventure for the Tibet tour from Kathmandu.

The Himalayan mountain range, formed about 80 million years ago when India broke away from a massive proto continent, has effectively blocked moisture from reaching the Tibetan plateau.  This has resulted in the desertification of the once lush and fertile plains.  There are three distinct regions in Tibet:

(b) Outer Plateau: a milder and more temperate climate with rich, well-developed agricultural areas.  The region includes Lhasa Valley and Shigatse where the weather is usually sunny and dry with relatively moderate winters.

(c) Southwestern Plateau ("River Gorge country"): comprises about 1/10 of Tibet's surface area.  This region is very rich in plant and animal life with an abundance of forests, deep river gorges, and both alpine and tropical plants.  The lowest point of the region is 5,297'.

Tibet has a rich mythological, as well as recorded history.  The country's political and religious roots are inextricably bound.  The first written records date from 600 AD when a Tibetan ruler wed both Chinese and Nepali brides who brought Buddhism to Tibet.  During the reign of the Mongols (c. 1200), the first Dalai Lama ("Ocean of Wisdom") was named and given authority over all of Tibet.  In the 1600s, Potala Palace was built with Lhasa as the administrative and religious center of a unified Tibet.   At this time, good relations existed between China (the Manchus) and Tibet, but by 1705, China threatened Tibetan independence. The British were also concerned about territorial control of Central Asia and sought to establish a treaty with the Dalai Lama to secure their control. After the British invasion in 1895, a treaty was established between Tibet and Britain, resulting in Chinese insecurity and tightening of control.  When the Communists took control of China in 1949, the incorporation of Tibet was a priority.  By 1951, Tibet maintained control of their domestic affairs, but China had a significant military presence; conflict escalated as the Chinese suppressed Tibetan institutions and all things religious.  In the ensuing uprising of 1959, the Dalai Lama fled to India.  In 1965, Tibet was established as the Tibetan Autonomous Region of the People's Republic of China ruled by Beijing.  By 1976, the subsequent systematic persecution and destruction of religious sites and artifacts reduced the number of monasteries to only ten.  Since this time, Chinese control has relaxed somewhat, but 50 years of Chinese occupation continues to desecrate the Tibetan way of life.

Given such a history, the people of this cold, high plateau have developed an independent and pious resiliency.  Whether a nomad, a valley farmer or among the community of monks, Buddhism is shared as an integral part of everyday life.  With the introduction of collectivism, the traditional Tibetan economy and way of life were severely uprooted.  Tibetans have been allowed some return to their previous lifestyle.  In 1995, the Chinese estimated the population of Tibet at 2.3 million people.  As many Tibetans have fled into exile and China's immigration policy has brought hundreds of thousands of Han Chinese into the Tibet Autonomous Region, this estimate is most likely inaccurate. 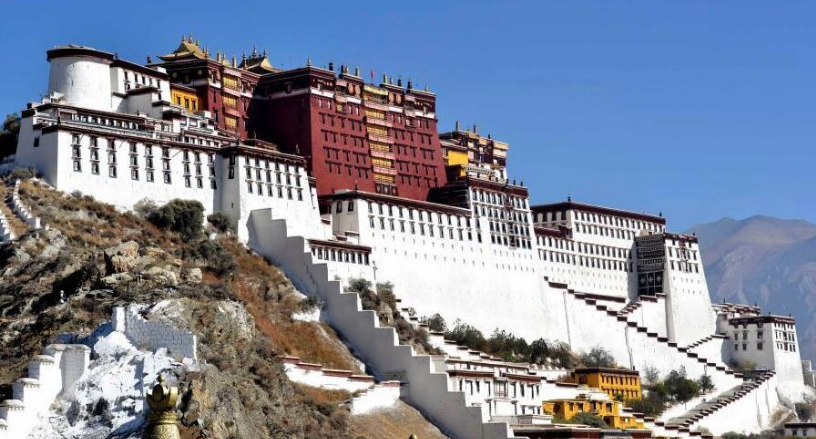 Buddhism teaches that ridding oneself of desire through discipline and meditation can eliminate suffering.  The "self" is an illusion trapped in the endless cycle of rebirth, created by karma, the chain of cause and effect.  By following the teaching of Buddhism, one can escape this cycle and achieve nirvana, the extinction of the ego.  Tantric cults and the ancient Bon religion influence the practice of Tibetan Buddhism.  The Dalai Lama, though exiled in India, still guides Tibetans worldwide.
Buddhism is an integral and deep-rooted part of the Tibetan way of life.  When visiting monasteries, hats must be removed at the door.  Walk clockwise both inside the prayer hall and outside the stupa or shrine. Most temples, stupas, and monuments can be photographed, usually for a small fee. It is suggested, however, that you request permission before using a camera (particularly with a flash).  Religious rituals and rites are usually not attended by foreigners.

Tibetan is rooted in the Tibeto-Burman family of languages.   While few Chinese speak Tibetan, many Tibetans speak both Tibetan and Chinese.  English is now taught in most schools.  Most signs are written in Tibetan and Chinese.  Learning a few words and phrases is an excellent way to get to know the locals.

Many Tibetans wear traditional clothing, especially nomads and those who live away from major towns.  Barkhor Market in Lhasa is the best place to observe the wonderful variety of dresses from different areas of Tibet.   Western clothes are the norm among the Chinese.

Tibetan summers are generally cool and dry, though the temperature can vary from the high 40s (F) to mid-60s within a day.  As expected at higher altitudes, the sunlight is intense and the thin air neither blocks nor holds heat.  High factor sunblock and a sun hat are necessities.  It is advisable to be prepared for sudden drops of temperature at night.  December through February is the coldest month with snowmaking high mountain trails impassable.

There are many places of both cultural and historic interest in and around Lhasa, including the Barkhor, Jokhang  Temple, the Potala Palace, Drepung Monastery, Norbulingka and Sera Monastery.  Guided tours will be available on these and other sites.

Tibetan festivals are based on the lunar calendar, which is approximately a month behind the western Gregorian calendar. Buddha's birthday (Saga Dawa), the Gyantse Horse Racing and Archery Festival, the Ganden Thangka Festival and Yogurt Festival are among the many celebrations held throughout Tibet.  We will provide you with exact dates of festivals that coincide with your travels.

Getting around Lhasa by bicycle is a great way to explore the city on your own.  Tricycle rickshaws and public buses are available for hire most anywhere in the city center.  Road conditions outside of the major towns are often primitive, necessitating the use of a 4-wheel drive Landcruiser or mini-van.

Chinese and Tibetan fare is available in restaurants in Lhasa and the larger towns.  Tibetan traditional fare consists of momos (dumplings), Shukla, noodle soup with meat or vegetables,  and tsampa, a doughy mixture of roasted barley flour, yak butter, and water, tea or beer.  Yak butter tea and chang, a fermented barley beer, are the local drinks; Chinese tea, soft drinks, mineral water, and beer are available throughout Tibet.  Dried yak or lamb meat and dried yak cheese are popular among the nomads.

We recommend both lightweight and warm clothing that can be easily layered.  Sunglasses, a hat and a scarf to protect your face against dust are essential.   In the mountain areas, warm clothes are a must.  (See our recommended clothing and equipment list.)

Even in the summer, Tibetans cover most of their bodies.  It is important to respect their culture by dressing accordingly.   There are both pilgrims and beggars seeking alms; donating a small amount of money to pilgrims is acceptable, as many of the beggars are professionals.